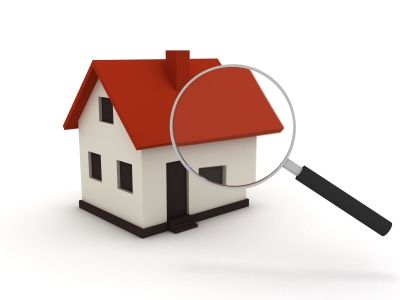 As an elected official, there are two things that rule above all else – property taxes and safety. Nearly every resident is concerned about both – not always equally, and not every resident. But certainly a majority, and who can blame us? We all want to be safe in and around our homes, and nobody likes their hard earned money going to taxes. Both are highly emotional issues as well – safety is a basic need that all humans have, and even aside from the politics of where and how much money is spent, money and finances are one of the primary conversations (and source of anger) in a lot of homes.

These two areas are also the most misunderstood and “mis-perceived” of all the things I get questions about.

I’ll touch on safety and crime in another post – in this post, I hope to change some of the misunderstandings about property tax.

Pieces of the Property Tax

Property taxes are very complicated. I am going to use some very simple examples to help illustrate the basic theory, but there are many, many variables that are involved in the real life final calculations that won’t be covered here. If this doesn’t confuse us all, I may take a stab at some of the more complicated features in the future.

At the most basic level there are two parts of a property tax calculation. The levy and an assessment or property valuation. Both are complicated in their own right, and we won’t get into too many details. We will see later that your final tax bill is also far more complicated than just these two parts.

Essentially the levy is the amount of money that is charged to property owners in the city. The levy is only part of the overall budget for the city, but to keep things simple we are just going to pretend that the budget and levy are exactly the same.

Let’s also pretend that we have only three categories in the city budget: Police and Fire, Streets and Parks.

Every year the city prepares a budget for the upcoming year. Priorities are set, projections are determined, and decisions made. This process takes some time, and there are several public meetings for residents to look at the budget and have their voice heard on the matter.

After much discussion the final totals are determined: 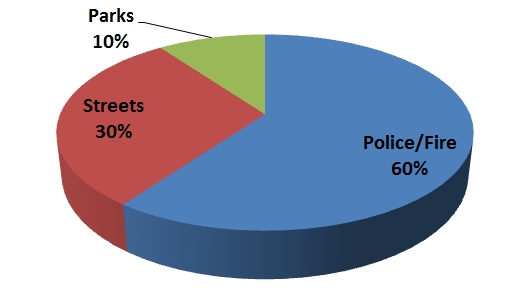 So the total levy is $1000, the amount that the city will collect from property tax paying residents. Once it is certified for a specific year it will never change, and in fact it can’t by state law.

But wait! There are other government agencies that contribute to a homeowners property tax bill. Again to keep things simple, I will only add the two big ones: county and school district.

The county goes through a similar budget and levy process, and the school district levies are voter approved through referendums. Both these portions are added to the total that will be levied against each property owner (in the next post we will see how the amounts for each property are determined). 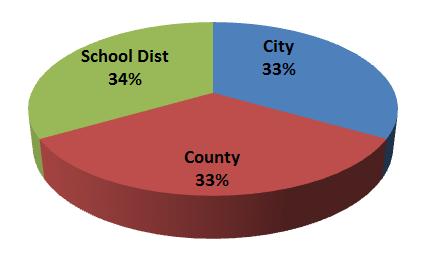 A little more complicated, but still not too bad.

But the complexities are starting. For example, let’s look at the impact on the final bill if the city decides to lower their levy.

Residents are unhappy – they think their taxes are too high. City leaders listen and make some tough decisions about how to cut the budget. After debate it is finally decided to cut all departments to varying degrees:

This results in a 25% decrease in the city levy. Great! People are happy – their taxes are going to go down 25%!

But wait! Since the city levy is only one third of the total levy, they final total isn’t reduced by 25%, it is only lowered by 8.33%.

Now, let’s look at what happens if the county and school district portion are changed as well.

As they are budgeting for Year 2, both the county and the school district realize they need to account for some major projects and need to raise their levy to pay for them.

Wow – the city’s 25% levy decrease is all eaten up and the total levy actually rises 5%!

So, as you can see there are dependencies and pieces out of each agencies control.

Once each of the levies are budgeted and then certified by each government organization, the rules are set for the following year and nothing can be done to change them until the following budget process.

I think it is helpful to think of it as a “pie”. The budget process is like creating the ingredients; the city, county and school districts are the recipe; and certification is baking and taking it out of the oven.

Just like when making a pie, ingredients can be changed but it is a little trickier to change the basic recipe. And nothing can be altered once it’s baked.

A little imagination is probably in order, because in this case no one wants a bigger portion of the pie. Perhaps call it a mud pie.

Tomorrow, we will tackle how the pie is split up. And that’s when the complexities really start to add up…