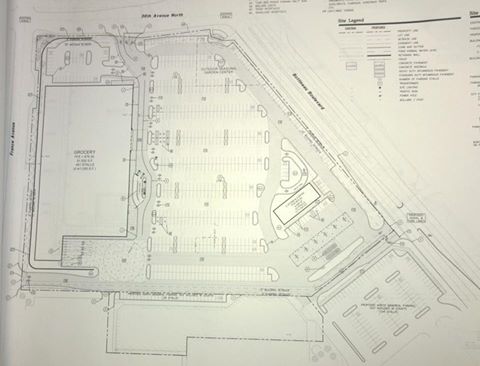 The news of a proposal for a grocery store at the Terrace Mall (36th and Bottineau Blvd) has spurred lots of conversation in social media and in person.

There seem to be some misconceptions or assumptions being made about the city’s role in this proposal and development in general. Hopefully this will answer some questions.

To reiterate, this is a proposal. There are still many elements and details that need to be resolved before decisions are made. There will be an Open House (July 13th, 4-7 pm at Hubbard Marketplace – 4145 Hubbard Ave N, a public hearing at a planning commission meeting (currently scheduled for 7pm July 21st at City Hall, and finally a City Council meeting to review the plans (7pm Monday, August 1, 2016 at City Hall).

The proposal was presented to the city by a private developer, on private property. The city did not choose the developer, the site or the eventual tenant.

City Staff did meet the Developer as part of a Developer Roundtable, used to help the city understand how developers look at redevelopment sites in Robbinsdale. Because the property was for sale, the Terrace Mall was one site that was discussed.

This is not unusual for development on private property. The city has the ability to designate areas for certain uses (zoning ordinances), but not dictate what is built there or how the land is used (outside building codes of course). An example of this is the CVS near Robin Center. A developer worked with a property owner and brought forth a proposal. It met all ordinances and rules, and despite opinions on how it looked or where it was situated, the project moved forward.

The developer worked with the current property owner to ensure that they would sell their property. They also worked with the eventual end user to ensure the site met the needs of the business. This includes normal due diligence for a construction project – soil borings, analysis of buildings on the site and marketing analysis. This is a multi-million dollar investment by a large grocer, and you can safely bet both the developer and the business have done all they can to do to ensure the company will be successful.

The developer also has worked with city staff to ensure the proposal they brought forward met the zoning ordinances and other rules the city has implemented for business districts, and specific traffic needs of the site. City staff also asked the developer to well document the condition of the theater, and this analysis will be made public at some point in the near future.

Most of this is also standard practice for developers. Staff has worked with other projects that went through several meetings and different plans, but then were abandoned or stalled for technical, financial or other reasons unknown to staff. Others have been successfully completed.

Many comments seem to assume the city owns the theater or has control over the building and/or property. This is not true.

The theater is privately owned, and the city has no legal rights pertaining to the property.

Mayor Murphy and I met with the property manager about 4 years ago, shortly after Rainbow announced their closing. At that time the property manager indicated they were open to proposals for the theater, either leasing or outright sale, but they required a full fledged business plan that included financing. They also estimated the cost to bring the property up to code (prior to any development for the final use for the building) to be well over $500,000.

At that time, they said there had been one business looking at the theater as offices several years prior. That company’s analysis concluded the cost to convert the theater was too high. Simply leveling the floor presented a cost that they would not have at other sites. They moved on to another city.

Since this is private property, the city has no insight into any other proposals or interested parties that may have inquired since then – although the Save the Historic Terrace Theater group has said they did make an offer.

The city hasn’t seen any other proposals for the Theater until the recent grocery proposal.

Actually there still isn’t a conclusion, at least at this point. There are questions to be answered, plans to see and residents to hear from.

For or against, there are lots of opportunities to learn more. Go to the Open House to see more detailed plans, attend the Planning Commission for the public hearing and voice your opinion or email a council member.